In the summer of 1967, I was 9 years old and we had only lived at Sherman for three years.  We were blissfully ignorant about Alaska’s capricious weather, and little did we know that this was going to be a summer none of us would ever forget. Our house still had a flat tarpaper roof. We were still learning about Alaskan gardening and how difficult it could be to successfully grow certain vegetables. As you garden in Alaska, you learn that vegetables which require a short growing season are the ones that do best, so you grow cruciferous vegetables such as cabbage, cauliflower and broccoli.

We planted our garden and thought we’d harvest plenty of potatoes and cabbages and…oh boy were we ever wrong! Not long after we had finished planting, the rain began. At first it wasn’t so bad, but it never really let up…and we began to notice that the Susitna River was awfully high, and our creek was awfully high…and that was June.

The new plants we had put in the ground in early June were kept from realizing their full potential by the rain. Instead, they got leggy – rather than cabbages forming heads, the plants just got taller, and the broccoli never made anything; the garden got progressively wetter 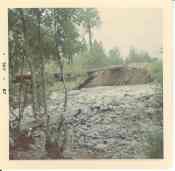 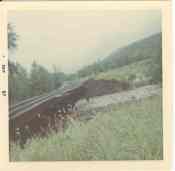 See How It Sags? They Sent a Man in a Gascar Across This!

The Creek Starting to Recede from Flood Stage 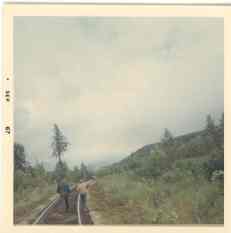 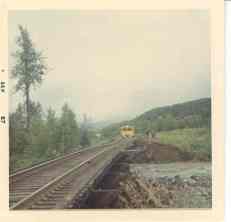 Two-Man Gascar About to Attempt Crossing the Bridge

B&B Crew with the Ditcher

July rolled around…and the rain just kept coming down. The river got higher and higher and the creek was a roaring torrent…and we were getting more and more nervous.

August was the death knell for the garden. As the rains continued, we noticed that there was standing water on our front path and the garden was a morass of mud with row upon row of leggy broccoli, cabbages and tiny, stunted potato plants.

By early August, rain had begun to swell all the rivers to the north – and in Fairbanks, the Chena River began to burst its banks. What does this mean for drainages to the south of Fairbanks? Well…you do the math. When it floods in Fairbanks – as it did in 1967 – then everything to the south experiences flooding as well.

In Fairbanks that summer, people took to canoes to provide transportation. Fairbanks was underwater. As bad as things were for us with the bridge washed out and no way to get into Anchorage, it was worse for people in Fairbanks. The rains in Fairbanks had started around August 8 and continued until August 20 – and when I say continued, I mean that it did not stop raining for twelve straight days – pouring, torrential rain.

The Susitna River was over its banks by the first week of August. We were fortunate because the homestead sits far enough away and high enough that flooding from the river isn’t the real problem. The real problem is Sherman Creek. It flows from east to west and represents the northern boundary of the homestead.

Every night I would lie awake listening to boulders tumbling westward to the Susitna River. The rocks must have been as big as a truck, because after about a week of extremely heavy rains, the bridge over Sherman Creek had washed out. This was a creosote piling bridge. The boulders had just smashed the pilings out like they were so many matchsticks. The bridge itself hung, suspended from either end, looking more like a swayback old horse than anything.

And still those boulders roared down the creek to the river…and the water rose higher and higher…but we were safe. Our house sits up higher than the creek…although the water got halfway up the creek path after the creek burst its banks, and it was weeks before it was safe to walk all the way down to the creek itself.

Eventually the Alaska Railroad B&B (Bridge & Building) crew came to replace the bridge. They bulldozed the creek bed to widen and deepen it, and instead of replacing the piling bridge with another piling bridge, the crew poured three huge concrete supports that were laced with rebar. It would take a hundred-year flood to wash that bad boy out now…

That was the summer of 1967. If you ever get to Fairbanks, visit the tiny museum in what was the old City Hall building. They have a wonderful exhibit about the 1967 flood. Just remember your waders…and flotation vests…

This has been a Finish the Sentence Friday post…and we were supposed to link to an old post OR write a new one…and I’ve been reminiscing a lot recently about the summer of ’67…so you are welcome! FTSF is, as always, hosted by one of THE most incredible women I know: Kristi Rieger Campbell of Finding Ninee (https://findingninee.com/this-aging-thing-aint-a-joke-friends/), and her lovely co-host, Kenya Johnson, of Sporadically Yours (https://www.kenyagjohnson.com/blog/2018/8/30/southern-drawl).