“Glory” is the word that often comes to mind about most of the summers I’ve spent in Alaska. I was born in Missouri, but we moved to Anchorage in 1963, when I was five years old…and then in 1964 we moved to our homestead, 32 miles north of Talkeetna on the Alaska Railroad.

Beauty, thy name is Sherman from January 1 to December 31.

However…GLORY! thy name is Sherman from the first bud bursting from the birch trees…from the first pussywillows peeping forth in late April when you feel the south winds…from the last tiny patches of rapidly-melting snow and greening ground…from the baby fireweed shoots and little bitty dandelion leaves so you can have the best wilted salad you’ll ever eat…then GLORYGLORYGLORYOHGLORY! Summer bursts forth from the frozen womb of winter.

See…in Alaska, we have three seasons: winter (includes a quasi-fall and 9 months, give or take eternity of snowanddarkness), breakup (when the snow melts and everything smells like recycled dog food if you get my drift) and then Oh Sweet Jesus GLORY that is summer…three whole months of the most beautifulness in the world.

Daylight that lasts for 24 hours. YES!

Leaves that peep and then POP…in less time than it takes to say holy shit it’s summer! Summer in Alaska is analogous to those intricate pop-up books. One minute you’re looking at a flat book that isn’t very interesting, and the next…wow. There’s a city inside that thing! Or a garden…or…well, you get the idea.

There is also the Summer Hell…like when it rains. All. The. TIME. Like..in 1967 it rained – I swear to you – for forty days and yea verily forty nights. Our garden drowned. No joke. Our flat front path was ankle-deep in water and for the first (and only) time since we’ve been at Sherman, the creek came halfway up to our house. It was so high from the torrential downpours of the summer that boulders (that I firmly believe were bigger than our HOUSE) tore out the creosote piling bridge across our creek….this is something I think I may have to explore further in another post.

Anyway…the downside of summer is that by mid-June, you know that you’re closer to a hard frost and that nasty white stuff and ice than you are to Glory. And then there are the mosquitoes. My friend Kristi Rieger Campbell swears that Virginia mosquitoes make anyone else’s look like couch potatoes…but I am here to call her out on that. In Alaska, ours are the state BIRD. OooRAHH.

This has been a Finish the Sentence Friday post, hosted by the ahhhhMAZING Kristi Rieger Campbell of Finding Ninee. 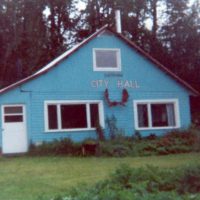